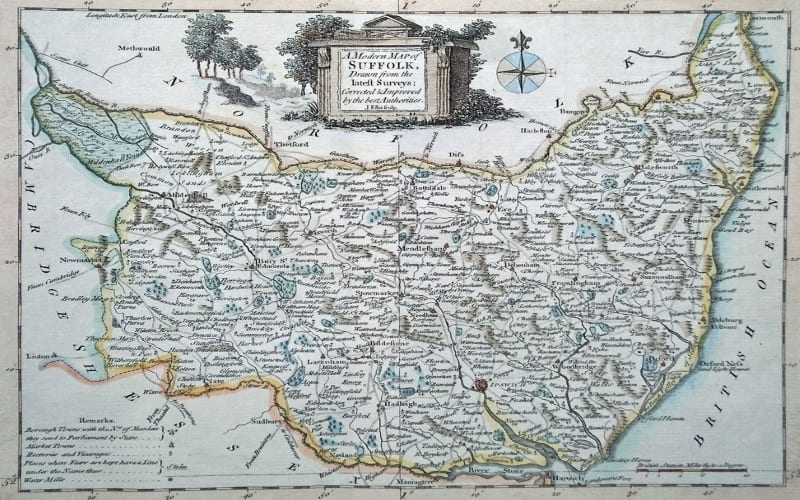 The large majority of the Suffolk place names are of Anglo-Saxon in origin. Here is a list of popular places and their Suffolk dialectic translation.

How place-names were formed

As with many locations in England being Anglo-Saxon controlled, Suffolk place-names are comprised of the name of a local Anglo­ Saxon chieftain or leader followed by the type of settlement at the end of the place name.

Places ending in ton (tun) usually means a ‘farmstead’ or ‘enclosure’. For example Stuston, in which the personal name is Stūt + ham (hȧm) ‘homestead’, ‘hamlet’ or ‘manor’. Another example is Saxmundham showing the personal name Seaxmund + ham.

Using ing in the middle or at the end of a place-name signifies ‘family’ or ‘people’, belonging to the chieftain such as Framlingham.

Many small villages and hamlets in Suffolk end with the suffix tye. Tye means a large common pasture and this dialect is often only found in Suffolk. Examples are Cornard Tye, Honey Tye, Darking Tye, , Kersey Tye and Stoke Tye. Very few examples are found outside Suffolk.

Place names ending in –ey, –ay, or –eye tend to refer to land being surrounded by water, or a dry area of higher land in a marsh. Again, place names are often associated with a personal name. (e.g. Lindsey and Bungay). However, Eye has no chief’s name at all. Could it be that Eye was a commune or common land? After all, it’s just an island in the middle of expansive marshland.

Bury St Edmunds is so named because it was an Anglo-Saxon burh which means ‘fort’ or ‘stronghold’. The dedication is to Edmund, a 9th century king of East Anglia, who was canonised, according to legend, because he would not share his Christian kingdom with invading Danes. The said Danes then promptly tied him up to a tree and filled him with arrows. The diocese is called St Edmundsbury. This is technically more correct.

Ipswich, is an Anglo-Saxon wĩc meaning ‘port’ or ‘trading place’ associated with a man called Gip as recorded in Domesday Book (1086) as Gipeswic. The Angle and Saxon variants in pronunciation are uniquely preserved in Ipswich with the softened g of the Angles, pronounced y- Yipeswic. having eventually become lost. While the Saxon hard g is retained in names such as Gippeswick and the River Gipping.

To read more about the Suffolk place names see the book Sloightly on the Huh by Charlie Haylock.